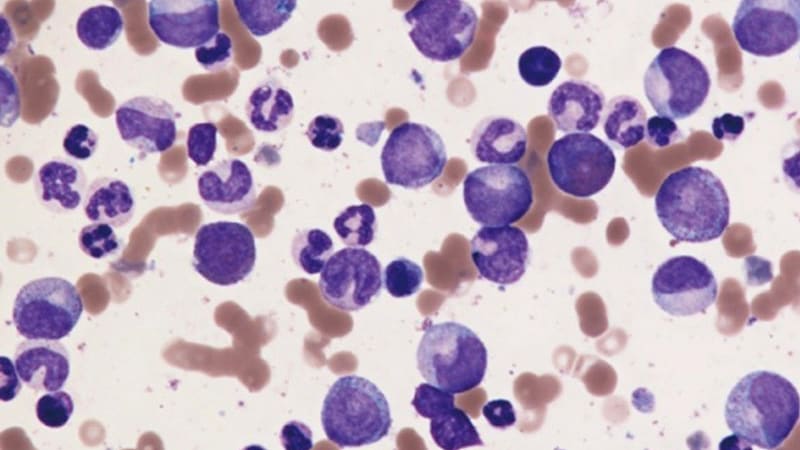 The investigational drug asciminib (being developed by Novartis) may become the new kid on the block for the treatment of chronic phase chronic myeloid leukemia (CMP-CP) for patients who have relapsed on or are refractory to at least two prior tyrosine kinase inhibitors (TKIs).

The trial was presented as a late-breaking abstract at the American Society of Hematology (ASH) 2020 virtual meeting.

Five TKIs have been approved by the US Food and Drug Administration to treat CML: imatinib (Gleevec; generics), nilotinib (Tasigna), dasatinib (Sprycel), bosutinib, and ponatinib (Iclusig).

All of them inhibit BCR/ABL tyrosine kinase by binding to the ATP-binding pocket.

By inactivating the protein through binding outside the ATP site, asciminib is a novel BCR-ABL inhibitor and may be a superior alternative to further traditional TKIs. “This agent promises to be an important addition to our treatment armamentarium for CML,” Styler told Medscape Medical News.

Another expert agreed. “Although we have many excellent therapies for CML, having a new medication that targets BCR-ABL in a novel way is still welcome to help us better care for CML patients,” Gabriela S. Hobbs, MD, told Medscape Medical News. Hobbs is the clinical director of leukemia services at Boston’s Mass General Cancer Center, Massachusetts.

Patients in this study had previously been receiving at least two different types of TKIs. “The responses looked very encouraging for this group of heavily pretreated patients. Although CML patients do very well on current therapies, those that don’t get a response with TKI remain a difficult clinical challenge,” Hobbs said.

“This is the first study comparing asciminib to a TKI directly (in this case bosutinib) and it showed safety as well as preliminary evidence of efficacy. I look forward to seeing additional studies with this promising drug and to have a new drug to add to the CML arsenal,” she added.

Identifying Patients Who Will Benefit From Asciminib

Patients with CML are currently sequenced through more than one second-generation TKI, Mauro commented. “If imatinib and a second-generation TKI have not served a patient well, only bosutinib has been studied in the third line and comparatively in the ASCEMBL study,” he noted. Asciminib was shown to be superior and could offer a clear alternative to ponatinib, which would be the other choice and is typically given even later after sequencing all other available options, he said.

Hobbs agreed. “This is a challenging group of patients to manage as their options are limited. Ponatinib is often the drug of choice in these scenarios, as well as bone marrow transplant,” she said.

Asciminib is not approved yet, but both Mauro and Hobbs are hopeful it will be by early next year, and that initial approval is likely in patients with CML-CP after several (two or three) lines of therapy. They also agreed that it may be effective (alone or in combination) in treating patients with T315I mutation CML, which is a particularly challenging disease.

Senior study author Andreas Hochhaus, MD, of the Klinik für Innere Medizin II in Jena, Germany, who presented the data at the meeting, noted new trials to test the efficacy of asciminib alone or in combination in earlier lines of therapy are ongoing and include the investigator-initiated FASCINATION study (first-line asciminib in combination) in Germany (NCT03906292).

ASCEMBL is a phase 3 study in which patients with CML who had received at least two previous TKIs were randomized to asciminib (n = 157) 40 mg twice daily or bosutinib (n = 76) 500 mg once daily. In a protocol amendment, patients with documented failure on bosutinib were allowed to switch to asciminib.

Median follow-up for the data cutoff was 14.9 months.

Hochhaus reported that treatment discontinuation was lower in patients receiving asciminib than bosutinib (38% vs 70%) and was mostly due to lack of efficacy (21% vs 32%) or adverse events (5% vs 21%).

The study met its primary endpoint: major molecular response (MMR) was approximately twice as high with asciminib than bosutinib at 24 weeks (25.5% vs 13.2%; P = .029). Treatment effect for MMR was 12.2%. Median duration of exposure to asciminib was 43.4 weeks for asciminib and 29.2 weeks for bosutinib.

“Consistent treatment effect was seen across all subgroups of patients, and MMR rates were consistently high for patients on asciminib across all prior lines of therapy,” Hochhaus reported.

The occurrence of Grade 3 or higher adverse events was lower with asciminib than bosutinib (51% vs 61%). Thrombocytopenia and neutropenia were more common with asciminib and gastrointestinal events were more common with bosutinib. Arterial-occlusion events were reported in five patients receiving asciminib and one patient receiving bosutinib. Most of these patients had prior exposure to imatinib, nilotinib, and/or dasatinib.

Mauro, a co-investigator of the phase 3 study, also treated patients with the drug in the phase 1 study. “I feel asciminib has proven to be very well tolerated, with rare to absent cases of intolerance,” he said. Cardiovascular and cardiopulmonary adverse events are exceedingly rare as well, he observed.

Longer follow-up of the ASCEMBL study and continued follow-up of the myriad of groups from the phase 1 trial (T315I-positive patients treated with higher-dose asciminib; combination therapy with imatinib/nilotinib/dasatinib + asciminib; and others) will be essential to settle any questions regarding selective adverse events of interest such as vascular occlusion, Mauro noted.