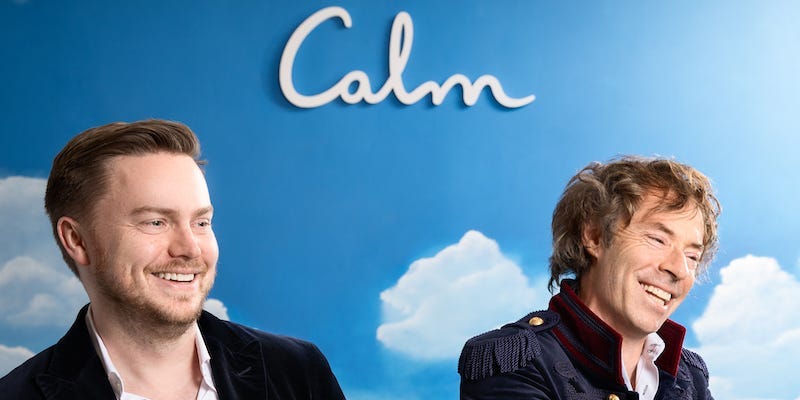 While many startups struggle to stay afloat during the pandemic, a select number are booming as consumers rely on their products or services throughout the crisis.

One such company is the meditation app Calm, which announced on December 8 that it raised $75 million in Series C funding at a $2 billion valuation. The round was led by existing investor Lightspeed Venture Partners, along with Goldman Sachs and Insight Venture Partners, and brings Calm’s total funding to $217 million.

Calm offers subscribers access to guided meditations, stories to fall asleep to, and relaxing music. It launched in 2012 and reached unicorn status last year, making it the first $1 billion startup focused on meditation. It’s part of a market expected to reach $2.1 billion globally in the next five years according to MarketWatch.

This year as consumers searched for mindfulness solutions during times of crisis, approximately 28.4 million installed Calm from the App Store and Google Play, a 16% year-over-year growth from the same time period last year, according to mobile app store marketing intelligence firm Sensor Tower.

The duo discussed how they plan to use the new $75 million, stand out in the crowded meditation space, and relax amid the chaos of running a mental health startup during a pandemic.

The conversation has been edited for length and clarity.

Michael Acton Smith: A few years ago, people didn’t fully understand what we were doing. The idea of meditation, mindfulness, and mental wellness was seen as weird and niche. The penny has very clearly dropped in society, looking after one’s mind is just as important as looking after one’s body. Investors are recognizing that we’re at a very early stage of an extraordinary new revolution. Our total addressable market is over seven billion people around the world, so we feel we’re still at a very early stage of an incredible journey.

What do you plan to do with the $75 million?

Tew: We’re going to quadruple down on business-to-business. We’re hiring rapidly into that team. International expansion is another. We’re in six non-English languages now and launching our seventh this week in Japanese. We also want to invest more in content. We want to produce content for every moment in your life, no matter what you’re going through, and for every demographic. We’re also interested in producing more kids’ content in 2021. Michael wants to spend it all on an island and I said, “maybe not right now.”

Acton Smith: We love this idea of Calm being much more than an app. We’re building a global lifestyle brand and great brands don’t just live in one domain. We thought it could be cool to create Calm Island, the world’s most relaxing resort. That’s a little ways off in the future and I don’t think we’re going to spend any of this financing round on an island.

Tew: We also love the idea of retail. We don’t have any concrete plans but we’re interested in taking the idea and message of Calm into more places and not just on the phone. We’re about 160 people now. I think we’ll maybe hire less than 100 people in the coming year. We like to keep things fairly efficient but things may chance as plans change. The pandemic showed us that things can change quite a bit.

Calm has competitors, such as Headspace, that offer similar services. How do you stand out in a crowded market?

Acton Smith: Part of our secret sauce is our playfulness. These practices have been around for thousands of years and we want to maintain its authenticity but bring it into the modern age. We work with celebrities like Matthew McConaughey or Harry Styles. When GDPR (General Data Protection Regulation, an EU privacy law) came out, we turned that into a sleep story, which people loved. We created an eight-hour movie of sheep grazing in a field called Baa-Baa-Land. These elements help grow the brand, help to get word of mouth, and sets us apart from other players.

Tew: Calm has been around for eight and half years now and that’s a long time to perfect the art of creating this content. It’s easy to create a movie — there are plenty of really crappy movies out there — but it’s really hard to create a great movie and we’ve consistently done that with each of our content pillars.

How does Calm plan to reach new potential customers who are either skeptical or aligned with other meditation apps?

Acton Smith: We want to offer new teachers and have done a lot of partnerships and business development with everyone from Kaiser Permanente to American Express to reach new audiences, and we will be doing that in different countries around the world.

Tew: The business-to-business side is just such a core driver of growth now as so many companies want to bring Calm to their workforces.

What about Calm and its offerings has changed in light of the pandemic?

Tew: When the pandemic started, we realized we wanted to get our content in people’s hands easily, quickly, and without any costs. We created a free resource page where we put a very large quantity of our premium content for free. That got millions of visitors very quickly. That was a big success in terms of trying to give back.

The other big thing for us this year was the business-to-business side. It was already going amazingly well before the pandemic, but it went up a few notches because companies wanted to provide tools to their employees.

Acton Smith: We’ve had a few fun projects as well. The Harry Styles sleep story we launched broke the internet. His fans just loved that. Sleep-related issues have been huge during the pandemic.

One slightly unusual area is the HBO Max show that we did. It showed the Calm can live as a brand beyond the app. That was a fun experimental project that people absolutely loved.

What are you both doing to manage your stress right now — both as humans in this world, and as entrepreneurs?

Tew: For me, it’s all of the things that we know to be good. I meditate every day and that has been a part of my life for many years. Getting enough sleep is another critical thing and I try to sleep 8 hours a night, if I can. I try to get plenty of physical exercise and fresh air. Also, staying in touch with people that you’re close to. That’s one of the harder things this year, there’s lost connections and we’re not with each other as much and that can have an impact on mental health.

Acton Smith: We can over-complicate this but, but in reality, it’s pretty simple. There are four things I try to be mindful of. One is physical fitness, two is mental fitness — meditating and trying to lead a mindful life. Three is sleep and four is nutrition. If you’re careful about those four areas and you can understand that they all interconnect, it’s extraordinary how great life can be. I’ve run many businesses in my life and I’ve let those things get completely out of balance, and I’ve seen the effect it has on me.